I finally made some time to craft for myself yesterday – it was so nice.  I picked one of my new sets – Beautiful Bouquet – page 92 of the Annual Catalogue.  This set comes as a bundle and who can resist a bundle.

Do you sometimes get stumped as to what colours to use for your projects?  Well when I’m in that situation I go to a really cool site called My Create Ink.  You can pick which Stampin Up colour(s) you want and then it suggests other colours to go with your colours.   So yesterday I loaded in Daffodil Delight (got to have yellow in a bunch of flowers) and Wisteria Wonder (a colour I don’t often use) and this is what I came up with.

First up we have Daffodil Delight, Wisteria Wonder and Calypso Coral.  I added Old Olive and Pear Pizzazz for the greenery.  The centre of the flowers is stamped in Early Espresso and then a hint of Clear Wink of Stella is added to the stamen of the Wisteria Wonder flowers.  To give a bit of dimension to this bunch of flowers I stamped three flowers again and cut them out with the coordinating dies and adhered with a dimensional.  To keep my bunch of flowers together I wrapped Linen Thread around the cut-out and then added a bow with a glue dot.  The sentiment is from the Thoughts and Prayers stamp set.

I decided that I may as well make a second card while I had the stamp and inks out. 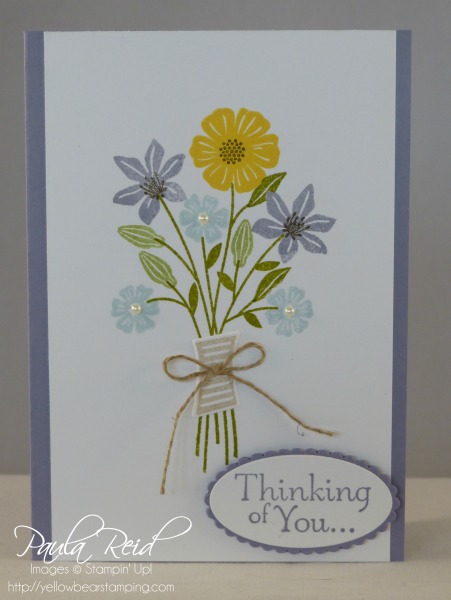 This time I’ve gone with another colour option that was suggested – Daffodil Delight, Wisteria Wonder and Soft Sky.  Again Old Olive and Pear Pizzazz where used for the greenery.  Instead of adding another layer of flowers for the dimension I added Basic Pearls to the centre of the three smaller flowers.  The flowers are ‘held’ together by a stamped images and a linen bow attached (again with a glue dot).  The sentiment is stamped on Whisper White then cut out with an Oval die and them behind is a Scallop Oval die – both from the Layering Ovals Framelits.  This time the sentiment is adhered with dimensionals whereas the other one was adhered directly to the card.

I like the strip of Wisteria Wonder card base showing at either side of the stamped area.

‘Thinking of You’ is a versatile sentiment that can be used for sympathy cards (the first one) or just to let somebody know they are in your thoughts.

2 thoughts on “Thinking of You cards”

This site uses Akismet to reduce spam. Learn how your comment data is processed.

Iconic One Theme | Powered by Wordpress